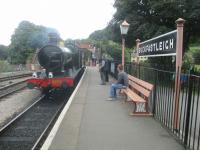 Buckfastleigh: South Devon Railway train arriving at Buckfastleigh on 5th September 2015. The locomotive is GWR Class 2251 no. 3205, designed by C. B. Collett and entered service from Swindon Works in 1946. It is the only survivor of the last design of 0-6-0 tender engines to be built in the UK. Withdrawn in 1965, it was later discovered on a farm where it had suffered the indignity of being used as a chicken coop. Rescued and restored, it spent time at the Severn Valley and West Somerset Railways before taking up permanent residence at the South Devon Railway in 1998. Overhauled between 2006 and 2010, it was repainted in 2014 in the 1960s livery of British Rail Western Region so that it now looks as it did just prior to its withdrawal.

Low Fell Permanent Way Depot: View over Low Fell civil engineers siding, Gateshead, seen from a passing train on the ECML in 1988. The yard has since been cleared and built on. 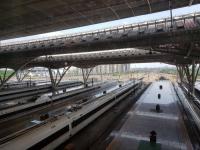 Wuhan: Wuhan Station looking south over the platforms. Wuhan Station, opened in 2009, is a major transport hub sitting astride the long distance Beijing - Guangzhou and Shanghai - Chengdu high speed lines as well as for regional intercity lines to cities in Hubei such as Huanggang. 20th June 2019.

Garstang and Catterall: Careful timing of the daily permitted walk on 14th April 2020 meant that 57301 was seen at Garstang heading south from Kilmarnock with Greater Anglia 317885 in tow, heading for Ilford Depot. In fact there were three loco hauled trains at this point in quick succession which was most fortunate in these restricted times. 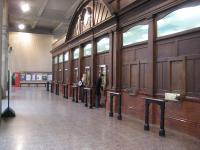 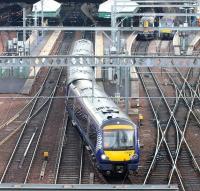 Edinburgh Waverley: Late morning scene at the west end of Waverley on 21 December 2017. Pulling out of platform 14 is ScotRail 170395 with a Fife Circle train. In the background a 380 EMU waits at 13 with a service for Ayr via Glasgow Central, while the newly extended platform 12 is occupied by a class 334, recently arrived from Milngavie. 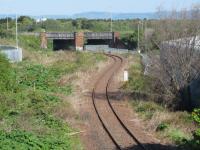 Meadows Box [2nd]: A look east along the South Leith Branch to the point where it went under Seafield Road at the location of Meadows box. Should the line be closed for good it is quite possible that the bridge will go and the road realigned to iron out the double bend the bridge causes. Photographed incidental to my daily exercise permitted under emergency coronavirus legislation.

Uffington: Being allowed out for the first time for many weeks, I set out on 14th May 2020 to Uffington to capture two Freightliners but alas disappointment set in as they passed through up to forty minutes early. However, GWR 800311 was photographed heading west at 1350 hours with the 1C15, 1302 ex-Paddington to Bristol Temple Meads, next stop Swindon.