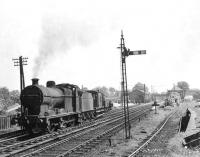 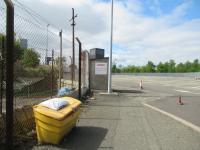 Crew Junction: Site of the sidings immediately east of Crew Junction. That rusty (lighting?) pole may be a remnant of the yard. Incidentally those sinister-looking towers in the background were used by a defence company for radar testing and will be demolished if housing is built here as planned. Photographed incidental to my daily exercise permitted under emergency coronavirus legislation.

Woodacre Crossing: Network Rail's 'Little Yellow Train', Measurement Sprinter 950001, is extremely well travelled and on 1st May 2020 worked from Derby to Carlisle calling at various points including travelling through the Barton and Broughton loop. Photograph taken at Woodacre on a permitted daily exercise walk.

Wemyss Bay: Wemyss Bay station was lit-up blue to show solidarity with key workers and front-line NHS staff all across the country. The beautifully restored station joined with other Network Rail stations and structures across the UK in lighting up in NHS colours to salute the dedication and efforts of healthcare workers in the battle against the coronavirus. Wemyss Bay's location on Scotland’s west coast offers panoramic views over the Firth of Clyde, which ensured this show of solidarity with our NHS staff and key workers was visible locally and across to the southern islands of Argyle & Bute. The £5m two-year refurbishment of Wemyss Bay station, which saw the canopies and glazed roof upgraded, repairs to the sea wall and improvements to the station buildings, was completed in 2016. It was voted best project in the National Rail Heritage Awards in 2017. 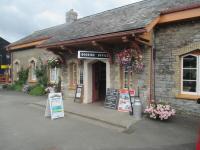 Buckfastleigh: The delightful exterior of Buckfastleigh station, South Devon Railway, on 5th September 2015. Opened on 1st May 1872, it closed to passengers on 3rd November 1958 and to goods on 7th September 1962. On 5th April 1969, the Totnes to Buckfastleigh section reopened as a heritage railway but the original intention to go to the ultimate terminus at Ashburton was thwarted by the trackbed on that section being utilised for a road widening scheme. This robbed the delightful market town of hundreds of tourists the railway would have brought in, contributing enormously to Ashburton's economy. 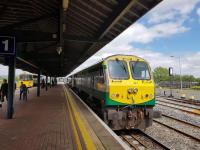 Biggar: The old wooden goods shed at Biggar, with the former goods yard here now taken over by a local construction company. The old station building still survives just off picture to the right. View is east towards Broughton and Peebles on 21 March 2011. See [[41912]].
See query 2286 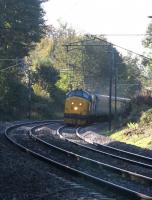 Lancaster Old Junction: 37402 Stephen Middlemore 23.12.1954 - 8.6.2013, working a passenger service from Preston to Barrow-in-Furness, drops down the bank passing the site of Lancaster Old Junction on 19th October 2016. Fast forward three years with image [[70781]] to see the replacement Furness line stock at this location. The trees on the left have also since been cut back from the lineside.

Coldstream: We'll ramble again - don't know where, don't know when. (added during May 2020 lockdown). The beautiful trackbed West of Coldstream raises memories of freedom of movement. 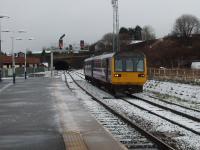 Blackburn: A dusting of spring snow at Blackburn, on 2nd March 2016, as a Pacer slows to call with a train from Colne. 142040 lasted in service with Northern until 2019 and then went under its own power to Newport in South Wales where it was scrapped in January 2020.