Vallsta: A reserve EMU of type X11 stops at Vallsta on its way south to Gävle; this route is normally served by X52 Regina EMUs. X Trafik is the brand name for the local transport services run by the public transport authority of Gävleborg County. These passenger trains ply between Gävle and Ljusdal. Rail traffic on this route is, however, dominated by freight as it is the link between southern Sweden and the northern rail network; the mainline is partly double and partly single track with long passing loops as here. 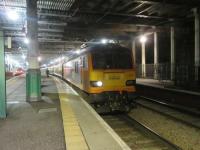 Woodacre Crossing: Rail still delivering the goods during the national emergency. 88002 'Prometheus' heads south at Woodacre with a full load of containers on 21st March 2020.

Gathurst: Looking east towards Wigan as 156426 approaches Gathurst with a service to Southport on 2nd March 2010. The large building on the right is part of the Heinz canning plant which includes baked beans.

Ettrickfoot Viaduct: View west at Ettrickfoot, some 3 miles south of Galashiels, from below the bridge that carries the A7 across the River Tweed. At this point the Tweed has just been joined by the Ettrick Water, running in from the upper left. It was here that the Selkirk branch crossed the river, midway between Abbotsford Ferry and Lindean stations. The branch closed in 1964 and the viaduct was subsequently demolished, although remains can still be seen in the river. This view in 2016 shows an angler alongside the remains of the north pier. For a view of the old viaduct from the south in the early 1960s see [[57798]].

Bowling Swing Bridge: Poster showing details of the repairing of the viaducts through Bowling, in preparation for reopening the route as a footpath. 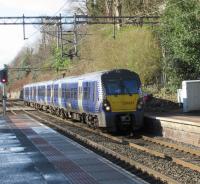 Bearsden: A Milngavie service approaches Bearsden on 26 February 2020. Signal YH404 protects the single-track section to Westerton Junction and is about to change to clear for a southbound train. Maybe the branch will be redoubled soon. Two single track sections on a busy branch is a bit silly and causes frequent delays.