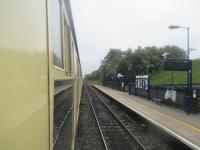 Yarm: UK Railtours' excursion returning south past Yarm station in North Yorkshire, on 11th June 2016. This station opened in 1996 on a new site south of the original, which had closed in 1960.

York: 68023 'Achilles' brings up the rear of a Liverpool Lime Street to Scarborough Trans Pennine Express service on 3rd March 2020.

Ambleside Pier: Ambleside Pier in March 2020. The ticket office is at the front of the building then the doorway leads through to the jetty for boats to Bowness and Lakeside.

Quainton Road: A comprehensive view of the Quainton Road preservation site from the North-West, including the transplanted Oxford Rewley Road station on the left. Ironically, a similar structure may now be needed at Oxford to shelter Chiltern Trains passengers arriving from London.

Moy: Almost there. London Euston to Inverness sleeper, hauled by 66727 'Maritime One' and 73969 on 13th March 2020. Due to reliability problems with the Class 73s in recent months, Class 66s have frequently been seen on the Inverness sleeper service.

Dinwoodie: Although working hard, there is only a light exhaust from the double blastpipe on 46115 'Scots Guardsman' as it heads north at Dinwoodie towards Beattock on 29th April 2014. This train was part of the GB VII round Britain tour however in 2020 the GB tour, scheduled for April, has been postponed due to Covid-19.