Maudlands Viaduct: The Pacers are now almost gone from Lancashire rails but here is a flash back to the summer of 2018 and 142036 leads a trio of the four-wheelers over Maudlands Viaduct working ECS from Blackpool North to Newton Heath. 142036 is reportedly heading for preservation at the East Kent Railway - an area that has not previously seen these units. 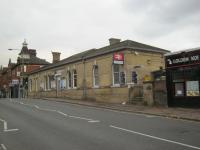 Clock House: Station building on road over-bridge at Clock House, on the ex-Mid Kent Line in south-east London, served by Charing Cross to Hayes (Kent) trains and seen here on 17th November 2012. The line was opened by the South Eastern Railway on 1st January 1857 but this station was an 'afterthought', not being opened until 1st May 1890. It is named after a nearby house that was demolished in 1896 but the name is still perpetuated in that of the station.

Lingerwood Mine: One of the few surviving relics of the Easthouses Tramway, looking south at the point where it passed below Lingerwood Road, just 50 yards beyond the level crossing carrying the mineral line [see image 71581]. This is my third visit to the site - the first time I missed it, the second time I managed to spot it through the vegetation but it was too overgrown to photograph. This time, thanks to the effects of winter defoliation and a pair of garden shears from the boot, I managed to get a picture. The old cutting was filled in long ago, with a ploughed field behind the camera and housing up ahead, including the land where Lingerwood Pit and its associated brickworks once stood.

Prestonpans: A North Berwick to Edinburgh service pulls into Prestonpans on 25 January 2020. The '40' applies to the loop which once also gave access to the Cockenzie Power Station branch. The remains of the branch are rusting away nicely, but the loop itself is in frequent use.

Sinnington: The now extensively extended Aislaby Carr Gatehouse, located on the single track Aislaby Lane around mid way between Sinnington and Pickering stations, by the former level crossing giving access to farm land south of the line. A footpath runs south west from the former crossing, and then heads west to reach Spa Lane where walkers will pass the former rail overbridge HMY30. [See image 72002]

Hest Bank: Vegetation has been cleared from the cutting at Hest Bank recently, opening up the view of Morecambe Bay behind the railway line. A TPE Class 397 hurries south on 5th February 2020, with a Glasgow to Manchester Airport service, but was actually terminated at Preston with a brake problem. 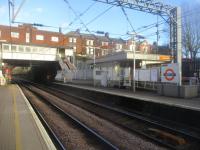 Kensal Rise: Kensal Rise station, London Overground, showing the building that replaced the original and which resembles more a public convenience than a station, looking east on 4th January 2020. This is on what was originally the Hampstead Junction Railway that celebrated its 160th birthday two days before this photo was taken although this station was not opened until 1873 as Kensal Green, replacing a station slightly to the west that had opened in 1861 as Kensal Green & Harlesden. The station was renamed Kensal Rise in 1890.