Barbican: The disused Widened Lines platforms at Barbican station, with the still extant Circle, Hammersmith & City and Metropolitan Lines platforms on the left, looking east in the snow on Sunday, 20th January 2013. This station opened as Aldersgate Street in 1865 with the extension of the Metropolitan Railway from Farringdon Street (now Farringdon) to Moorgate Street (now Moorgate) and was renamed Aldersgate & Barbican in 1923 (though it was never shown on the famous London Underground diagram as such) and finally to just Barbican in 1968. The former all-over glass roof was destroyed in the London Blitz of World War Two and the frame was taken down in 1955 but it is still possible to see the support brackets on the walls of the two side platforms, above the replacement canopies. For many years, this station was closed on Sundays but is now open full-time again.

Didcot Parkway: A Gloucester RC&W Class 119 three-car DMU enters Didcot from the Oxford direction in 1984 while a Pressed Steel Class 121 single car waits on the opposite side of the island platform. 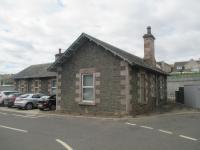 Stow: Former station building at Stow, closed with the entire Waverley Route in January 1969, seen here on Sunday, 15th May 2016. The station reopened as part of the Borders Line, on 30 miles of the trackbed south from Edinburgh, in September 2015 but the building has not been revived for railway use. 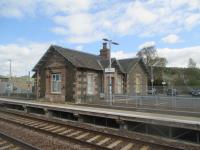 Stow: Stow station, closed with the entire Waverley Route in 1969, reopened for the Borders Line in 2015, seen here on Sunday, 15th May 2016. Sadly, the building has not been revived for railway use. Rebuilding of the line at this location involved the demolition of a virtually brand new house that had been built on the track bed.

Knott End: In 1950 this view, taken from behind the buffers, would have been of two platforms with tracks at Knott End station and would also include a water tower, the goods shed off to the right and 'Station House' on the left in the distance. Passenger trains had ceased in 1930 and the final goods train left in 1950. Seventy years later, apart from the cafe in the rebuilt station building behind the camera, the only railway linked building to survive in this car dominated scene is 'Station House' [See image 57696]. 31st December 2019. 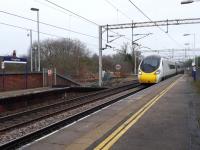 Congleton: What speed benefit does tilt give? The sign on the approach to the curve north of Congleton station indicates that the enhanced permissible speed (EPS) is 105mph compared to 80mph for conventional rolling stock. An Avanti West Coast Pendolino takes full advantage as it races through the station with a Manchester Piccadilly to London Euston service on 27th December 2019.

Winchcombe: A class 47 hauled service crosses a DMU at Winchcombe in August 2019.

Bootle New Strand: Looking north at Bootle New Strand as a Hunts Cross to Southport service departs on 28 December 2019. The one thing I associate with Bootle is the tax office and Triad Building, only a short distance to the east of the station.

Duddingston: The 0708 Leeds - Aberdeen passing through Duddingston on 28 December 2019 having been diverted via the Edinburgh south suburban line due to engineering works at Haymarket East Junction. 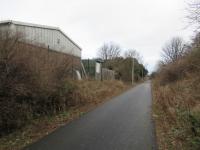 Gilmerton: The site of Gilmerton station, seen looking towards Millerhill on 30th December 2019. Zilch remains of the platform, but the station house (where my auntie once lived) is up on Gilmerton Station Road, next to the larger former home of the colliery manager. Another website (no names) says the latter is often mistaken for the former; just to prove the point it does so itself in a photo caption

Tyne Commission Quay: I found this booklet of travel instructions from a trip to Norway in 1967. Trains Glasgow, Edinburgh, Newcastle Central and Tyne Commission Quay. Just change platforms at Newcastle, walk from the platform at TCQ through the transit shed and on to the ship. Now it is a double deck bus to the Quay, but this is totally inadequate with virtually no space for luggage. What a blessing was Dr. Beeching and not much appreciated. [See image 35716] 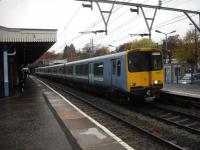 Harold Wood : 315858, from Liverpool Street to Shenfield, arriving at Harold Wood station in Essex (the most easterly station within the London Fare Zones), on 24th October 2009. The line here opened in 1840 but Harold Wood station was not opened until 1st September 1868 by the Eastern Counties' successor, the Great Eastern Railway and was rebuilt in 1934 when the line was quadrupled between Romford and Shenfield, including the notorious Brentwood Bank.