Annbank: 37376 comes off the Killoch branch at Annbank with a loaded coal train on a foggy day in 1989. The Type 3 later saw service in France but on return to the UK did not run again and was cut up by Booths, Rotherham in 2005.

Windermere: 195122 pulls away from the Windermere terminus with a Manchester Airport service on 4th January 2020. There is a short rise to a summit outside the station, followed by a descent of eight miles to Kendal, before a further climb to the main line at Oxenholme.

Cameron Toll Signal Box: A diverted Voyager crossing the A7 at Cameron Toll during a circuit of the Edinburgh sub on 28 December 2019. The diversion was the result of a three day engineering occupation at Haymarket East Junction. (Note the evocative railway names on the nearby road sign.)

Gleneagles: One of Stirling shed's BR Standard class 4 tanks no 80125 standing alongside the branch platform at Gleneagles in the spring of 1956 awaiting departure time with a train for Crieff. [See image 68447]

Morrison Street Goods: After decades as a car park the site of Morrison Street Goods has been awaiting development for a further few years. Since I took this photo new, flashy adverts for the proposed development have appeared on the hoardings so who knows. To get your bearings Ryrie's at Haymarket corner is straight ahead with the station out of sight behind that house. 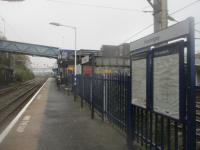 Harringay: The remaining outer side of the former northbound island platform at Harringay station looking north on 21st November 2019. This station was added to the GNR's London Extension of 1850 on 1st May 1885 as Harringay and was renamed Harringay West on 18th June 1951. The original and much more grand ticket office on the bridge suffered severe fire damage in the early 1960s and by 1969 the remains had been replaced by a small timber shack which is still there today. The station reverted to its original name on 27th May 1971; the inner half of this platform on the down fast track was abolished when the London suburban services were electrified on and from 8th November 1976, leaving the station a shadow of its former self. Ferryhill Junction: In the gathering darkness is this view to the north of the signals nearest to Ferryhill Junction box and that Class 40 was moving about again. The 'light in the sky' is a reflection of the interior lighting off the window glass. Arnside: Northern CAF DMU 195112 passes under a temporary footbridge that was being erected at Arnside on 30th December 2019. The train was a Barrow to Manchester Airport service.

Bank Hall: 508111 in 'Beatles' livery departs from Bank Hall on 28 December 2019 while working a Southport to Hunts Cross service. Bank Hall MPD was a short distance away in the direction of the steps off the platform. To the right above the yellow grit bin can be seen the road bridge above the line to Kirkdale, Ormskirk and Kirkby.