Grantham: Plaque mounted on overhead line support pillar on down main line side of Grantham island platform, indicating it to be the 10,000th electrification mast erected along the East Coast line

Tondu: It's a good job the signals are down at Tondu - you know not to expect anything to come down the valley. Seriously, it is a nice surprise to see any rails still present, some 30 years after the Ogmore Valley lines closed to all traffic. Picture taken from a train to Maesteg. 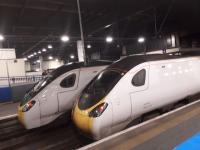 Euston: Ewan - can I caption this as two naked Virgins? No? Okay. Two debranded Pendolinos at the Euston buffers on 4th December 2019.

Preston: Voyagers 221104 and 221101 head south from Preston, approaching Skew Bridge, with an Edinburgh to Euston service on 5th December 2019. 221104 is still in the Virgin silver colours but 221101 was reliveried like the Pendolinos over a white base coat in 2017 and has been debranded ahead of the franchise change. This image taken from the Preston to Southport trackbed near the point where it passes under the WCML. 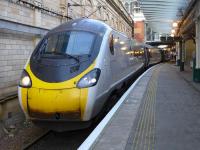 Edinburgh Waverley: With five days of the Virgin franchise to go, de-branded 390020 forms the 14.52 service to London Euston, at platform 9 in Waverley. From 8th December the franchise will be taken over by First Trenitalia operating as Avanti West Coast. 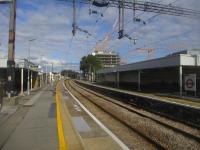 St James Street: St. James Street station, Walthamstow, east London, looking towards Chingford, on the afternoon of Saturday, 7th September 2019. This station was opened by the GER on 26th April 1870 and became part of London Overground on 31st May 2015. All the original Victorian buildings with their wooden canopies were replaced by the present less attractive shelters in the early 1970s, once again under the then BR Eastern Region regime's idea of 'improvements'. Wood Street station, two stops down the line towards Chingford, was similarly bludgeoned. Bruce Grove and Edmonton Green stations on the Enfield Town line managed to escape unscathed and today provide a good guide to how St. James Street and Wood Street stations used to look.

Dorridge: Dorridge station after dark, seen from 168 218 with a National Rail Chiltern Line service from Birmingham Snow Hill to London Marylebone, on 18th March 2014. This station, opened by the GWR in 1852, was known as Knowle & Dorridge until 6th May 1974. When BR started their mania for shortening station names with an '&' in them in the 70s, it was usually the first name that was retained, i.e. Cholsey & Moulsford became simply Cholsey but here it was the second name that was retained, while other stations like Highbury & Islington escaped this unnecessary name shortening completely. When this station was still called Knowle & Dorridge, the express service from London Paddington to Birkenhead Woodside, that finished in 1967 and saw the closure of Birkenhead Woodside station, came this way but did not stop here.
See query 2209

Gorebridge: ScotRail 170427 seen shortly after leaving Gorebridge with the 0950 to Tweedbank (0924 ex-Waverley) on a grey 5 December 2019. The train will join the double track section from Fushiebridge to Tynehead just beyond the 'footbridge in the field' in the background. 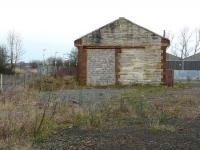 Kilmaurs: The former goods shed at Kilmaurs in February 2012 with the station platforms to the left.

Watergate Halt: The remains of Watergate Halt, North Devon, in June 1984, almost 20 years after the last passenger train called. View north over the former level crossing towards Torrington. The line itself closed in 1982. 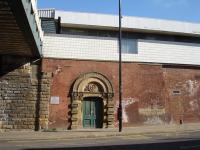 Wakefield Westgate: A little used door alongside Westgate within the sole remaining up side original station sub-structure at Wakefield Westgate station, giving access to the undercroft, with the 1960s replacement tiled superstructure sitting atop. The window of the first class lounge can be seen in the newer building, and the bridge over Westgate at the south end of the station sits overhead.

Oxford: A bright and sunny day at Oxford as 66588, on a southbound Freightliner, crawls through due to adverse signals on 29th November 2019. There was a signal failure in the Didcot area which impacted on traffic.