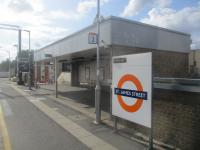 St James Street: Down platform for Chingford trains at St. James Street station, Walthamstow, east London, on 7th September 2019. The unaesthetic buildings, on this and the up platform, replaced the original Victorian structures about 100 years after the station's opening on 26th April 1870. The station name is slightly a misnomer as the thoroughfare, which the line crosses immediately to the west of the station, is actually called St. JAMES'S Street.

Kirklee: The remains of Kirklee Station.

Rowsley [2nd]: Another Heritage Shunters Trust locomotive, pictured in the confined Rowsley shed in May 2017. This is Barclay Class 01 D2953, a 153hp DM 0-4-0 from 1956. It is reputedly the first BR Diesel locomotive to be sold into industry, going to Thames Matex in Essex in 1966. It has been preserved since 1985. Behind is another small 0-4-0, Class 02 D2854, which is only four years younger but arguably more stylish and also very practical with its big windows and veranda cab entrance.

Aviemore Speyside: CR no.828 performs the run round operation at Aviemore Speyside in August 1994. Some passengers are waiting to be enveloped in steam when the loco passes under the former GNSR footbridge from Longmorn.

Dalwhinnie: Dalwhinnie station's south end in early 1995. The snow revealed a surprising number of footprints across the track between the platforms.
See query 2208

Edinburgh Waverley: The last two passengers about to board the ScotRail 1030 service to Glasgow Queen Street as it prepares for departure from Waverley's platform 12 on 21 November 2019. I remain totally convinced that the designer of these units was heavily influenced by the superhero character 'Batman' (the Michael Keaton Version).

Mearns Street Junction: Looking west along Ann Street Tunnel at Mearns Street SB in 2011. Black and white is used as the light at this point was very poor.

Dunragit: Approaching the level crossing at Dunragit from the north in the spring of 2007. The former station, six miles east of Stranraer Harbour, closed to passengers in 1965. The plaque alongside the back door reads 'Station House Dunragit'.
See query 2207 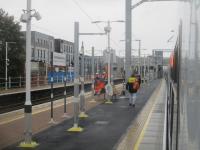 Northumberland Park [London]: 317657 at rear with 317655 at head on bi-directional track, calling at Northumberland Park's new third platform with a train from Stratford to Meridian Water on the first day of the new shuttle service, Monday, 9th September 2019.

Newington [NBR]: OB 15 seen from the tiny public park at the corner of Mayfield Road and West Saville Terrace in June 2016. It looks to have been an aqueduct, but nowadays it is a pipe bridge presumably carrying water pipes. The cascading ivy has been removed [see image 55350]