Crookston: A plaque was unveiled at Crookston today by the South Cardonald and Crookston Community Council at Crookston Station in memory of the late Alistair Watson. The plaque reads: 'In memory of Alistair Chalmers Watson. ScotRail employee 1976-2003. Ward 4 Councillor 1995-2017. In recognition of his service to our community and his campaigning to make transport more accessible for all.' 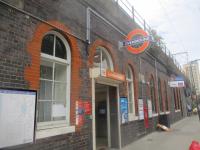 London Fields: Entrance to London Fields station, built into one of the arches of the GER viaduct of 1872 that extends from Bethnal Green to Hackney Downs, seen here on 31st August 2019. The station is served by trains to Enfield Town and Cheshunt which, along with the line to Chingford, became part of London Overground on 31st May 2015. Chingford trains do not normally call here, passing by on the fast tracks on the east side of the viaduct which are without platforms as is the case at Cambridge Heath station, the next stop south towards Liverpool Street. Greater Anglia trains to Cambridge and the Stansted Express trains also serve these tracks.

Fushiebridge: The 1029 Tweedbank - Edinburgh has just passed the signal controlling Fushiebridge Points and the single line section to Kings Gate on 28 November 2019. The train is just over half a mile from its next scheduled stop at Gorebridge. The high point on the horizon to the left is the tree covered north bing of the former Emily Pit [see image 61804].

Balloch Pier: MV Silver Marlin enters the River Leven to return to her mooring by Balloch Road bridge in November 2019. Distantly on the left is the east side of Balloch Pier. 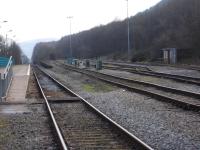 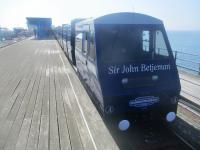 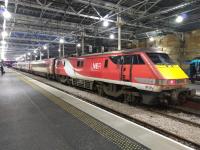 Penrith: Early morning view from the Carlisle platform at Penrith on 21st October 2019. This looks north towards the station buildings and shows the old bay, latterly used by Keswick trains. The original length of the now greatly extended platforms is shown by the old ramp, alongside the new footbridge. The banner repeater is on the Down Loop, which rejoins the mainline immediately beyond the station. 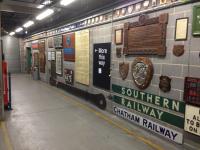 National Railway Museum [York]: Another wall of memorabilia in the small exhibits section of the NRM at York in 2019.

Charing Cross [GC and DR]: 334023 arrives at Charing Cross with the 1339 departure to Dumbarton Central on a driech 22 November 2019. I remember using the original station building which used to stand above the tunnel (behind the camera) and which was swept away (along with many other buildings in the area) when the M8 motorway was being built. The roof of the replacement building (in ScotRail blue) can be seen above the concrete wall.

Corby: Creeping modernization - a second track and OHLE have arrived at Corby since my last visit [see image 60099]
See query 2206

Hexham: A Scotrail 156 DMU about to pass below the signal box gantry shortly after restarting from Hexham station in February 2007. The train is the 1000 Stranraer Harbour - Newcastle Central. The metal barriers visible at the bottom of the picture are in connection with retail redevelopments on former railway land to the east of the station once occupied by the locomotive shed and goods yard.