Market Harborough: It's not every day you see a disused station car park. Fortunately for users at Market Harborough, a bigger replacement car park has been opened on the East side of the line. 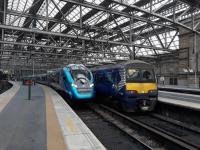 Glasgow Central: TPE 397007 awaits departure from Glasgow Central with the 11.14 to Manchester Airport on 1st December 2019. This was the first 397 to work out of Glasgow, as the previous days 09.07 working was cancelled. I travelled on the train to Carlisle and the ambience was great with seats nicely lined up with windows, much better than on a Pendolino. Unfortunately the seats are a little hard and those on the unrefurbished Class 158 that I continued my journey on were much comfier. 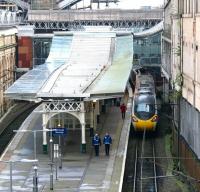 Edinburgh Waverley: The view east from Waverley Bridge on 21 November 2019 would suggest the six year old canopy over platforms 8&9 is due a bit of a clean - not to mention some weeding [see image 43131]. The Pendolino standing at platform 8 is the Virgin Trains 1052 to London Euston. The works in the background are part of the ongoing twenty two million pound refurbishment of Edinburgh's North Bridge, due for completion in 2021.

Bay Horse: Detail of the damaged Down Line catenary at Bay Horse as the sun begins to set on 27th November 2019. Around half a mile or so of wiring was brought down by a pantograph and it was the following morning before any services could resume and begin to get back to normal.

Southend-on-Sea [Upper]: The single car of the Southend-on-Sea Cliff Railway is seen at the Upper station on Bank Holiday Monday, 26th August 2019. At 33C (94F), it was the hottest August Bank Holiday on record. Because there is only one car the counter balance is a weight that slides underneath the tracks.

Kilmaurs: The former goods shed at Kilmaurs showing the former vehicular entrance on 8 February 2012. The buildings had a variety of uses following closure by BR around 1985 including a coal merchant and a civil engineering contractor.
See query 2205

Kelvin Bridge: The former Kelvin Bridge Station in 1993, with the tunnel mouth blocked off and Caledonian Mansions above.

Invergowrie: 43036, on a crew training run from Perth to Dundee, slows to call at Invergowrie on 24th August 2018.

Cardross: The 1124 hrs from Glasgow Queen Street to Oban & Mallaig passes Cardross on 22 November 2019. For a comparison of location and traction [See image 18458] from 47 years ago. 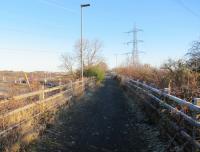 Straiton Sidings: A view of the old Glencorse branch between Loanhead and Gilmerton, looking towards the latter on 18 November 2019. The replaced bridge in the background crosses the Lasswade Road. The squint post on the left probably once held a notice for drivers. I wonder what it said: Whistle? Catch points? Check your mirrors? Substantial development is under way at 'Gilmerton Heights' (sic) on the left; a little late to save the branch.

Preston: Inside one of the new Class 397 EMUs on the first day in passenger service being operated between Scotland and the North West of England. Looking from the vestibule area into the seating area, while the general feel of the seated area was very pleasant, it was noted that the aisle was quite narrow and it is definitely a case of BYOC (Bring Your Own Cushion) if you don't have in-built padding of your own!

Didcot Parkway: Although a bright and sunny day on 29th November 2019, it all came to a grinding halt due to a signal failure in the Didcot area. Several trains were cancelled with others moved to a different platform much to the annoyance of the traveling public. One chap was convinced that only nationalisation would cure all the ills until it was pointed out that the fault lay with the Government owned Network Rail signalling system. Comments there came none. 387169 prepares to depart Didcot for Paddington.