This was a passenger terminus. It was built on roughly the site of Fleetwood [1st] which had been served from the south by a single track line approaching over a causeway and tressle bridge.
...

A late evening view of Fleetwood, across the Wyre Estuary from the Knott End slipway on 21st June 2020. From left to right are the lighthouse in ...
Mark Bartlett 21/06/2020 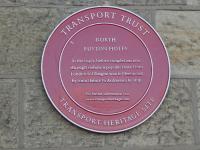 The North Euston Hotel opened to guests in 1841 and a Transport Trust plaque by the entrance marks the period when it was a stop off point on the ...
Mark Bartlett 01/10/2019

The site of Fleetwood station, closed in 1966, as seen across the Wyre Estuary from Knott End. The three modern buildings to the left hand side of the ...
Mark Bartlett 14/02/2016
4 of 5 images. more