Summer of 1960 - Arrival of Diesel Power on the ECML

The BR modernisation plan, announced in 1955, paved the way for the changeover from steam to diesel power on Britain's Railways. Three years after its publication, the English Electric Company duly delivered the first five mainline diesel locomotives intended for use on the ECML to BR Eastern Region. 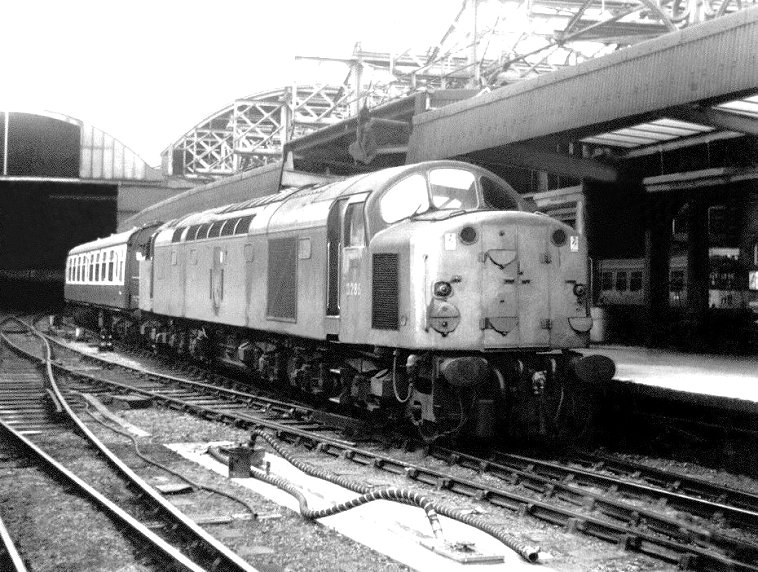 Newcastle Central: D285 arriving at Newcastle with a train from Liverpool in September 1969. John Furnevel 30/09/1969

The locomotives in question were all EE Type 4s (later known as class 40s) numbered D201/6-9 and were allocated to the London area where they would operate out of Kings Cross.

The initial problem was where to put them, Kings Cross shed (34A) was out of the question, since it had never had enough space for its existing steam allocation.

No decision had yet been made on the construction of a new diesel depot for the area which, once such a decision had actually been reached, was still likely to take a year or more to complete.

After much deliberation and considerable shuffling of existing locomotive stock and diagrams, the five new EE type 4 diesels were eventually allocated to the old steam shed at Hornsey (34B) where they duly arrived in the early summer of 1958.

In addition, refuelling and other 'rapid turnaround' facilities were provided at the 'Kings Cross Loco' sidings at the northwest corner of the station.

Then, on Saturday 21st June 1958, to the delight of many (and the surprise of some), a gleaming D201 took the first diesel-hauled Flying Scotsman out of Kings Cross.

This quickly led to the first of the 'trial' ECML diesel diagrams, which were introduced as part of a revised 1958 summer timetable on Mondays to Fridays between 25 August and 12 September, when a Type 4 was diagrammed to work the 4pm 'Talisman' to Newcastle returning south with the overnight 'Aberdonian' sleeper.

D207 was the first example of the class I ever saw - I watched mesmerised along with 3 school pals, from the wall at the west end of Newcastle Central, as it brought the 'Talisman' off the King Edward Bridge and round the curve into Central station at the end of August that year.

By the start of the winter timetable regular diagrams had been introduced for all 5 of the Hornsey Type 4s covering the 'Tees-Tyne Pullman', the 2 daily Sheffield Pullman services and the 'Flying Scotsman' amongst others.

Deliveries of the new diesels continued steadily throughout 1959 but, during April of 1960, things really took off in the northeast, with no less than eighteen English Electric Type 4s (D237-49 and D270-74) arriving during the month at Gateshead shed (52A). The new arrivals would support the increasing number of London based examples appearing on ECML diagrams and enable further extension of diesel hauled services generally.

Meantime, another mainline diesel type operating on the ECML, the prototype Deltic, which had arrived 'on loan' from English Electric in February of 1959 was coming towards the end of its operational service.

She finally finished her stint at the end of 1960, just a few weeks prior to the first of the production Deltics (D9001) emerging from the Vulcan Foundry and being delivered to BR on 17 January 1961.

This first example retained the naming tradition applied to many of the top link steam locomotives it would subsequently replace and was named 'St Paddy' after the winner of the previous year's Derby. D9001 became the first of eight of the class to be allocated to the Kings Cross area's custom built, diesel depot at Finsbury Park which had been brought into service the previous April.

The changeover from steam to diesel had really started to gather pace on the ECML from the beginning of 1960 and, during the summer of that year, the balance finally tipped.

For the record, (yes, I did keep my notes) on Wednesday 13th April 1960 a group of us cycled after school to Birtley, County Durham, where we observed the following passing on the ECML in a period of approximately two and a half hours.

Three months later (19 July 1960), during the school summer holidays, we spent a couple of hours noting traffic on the ECML in and around the Newcastle area. This produced the following

The 18% of ECML express passenger trains that had been diesel hauled in April of that year had rapidly risen to 61% by July - not that we calculated the percentages at that time, we didn't need to.

Over a period of three months the diesels had taken over ...and they just kept on coming.

When you are 13 years old your perceptions of time, distance and the inevitability of change are different. The 6 week school summer holiday seemed forever, distance was no object providing you had a bike, steam would never totally disappear...

But it was never the same after the summer of 1960.