In 1942 the government opened a munitions factory at Charlesfield, near St Boswells.

Charlesfield Halt: The bridge that once carried the Waverley route over an unclassified road, one and a half miles south of Newtown St Boswells, seen here looking east in February 2017. The wooden platforms of Charlesfield Halt were constructed here in 1942, for the benefit of workers at the nearby munitions depot (now an industrial estate) visible in the background. Access to each platform was via steep pathways on the south side of the bridge to the right. The path nearest, serving the down platform, has been widened since closure to enable access for farm vehicles. John Furnevel 14/02/2017

It was located in the ^V^ formed by the junction of the Waverley route and the Kelso branch to the south of Kelso Junction.

Built by ICI, Charlesfield specialised in the production of incendiary bombs.

Charlesfield Halt: In 1942 a Government munitions factory was opened at Charlesfield, to the south of St Boswells, located below the ^V^ formed by the Waverley route and the Kelso branch. The site was provided with a freight only rail link consisting of a spur off the Kelso branch to the east, while a quarter of a mile to the west a passenger halt was provided on the Waverley route for the benefit of factory workers. At the end of WWII Charlesfield became a Royal Naval armaments depot, remaining in military use until 1963. The site was subsequently transformed into what is today a busy industrial estate. (The last recorded use of Charlesfield Halt was in late 1959, with official closure taking place in 1961.) Imagery (c) 2016 Google and (c) 2016 DigitalGlobe. Annotations by John Furnevel. (c) 2016 Google and (c) 2016 DigitalGlobe 14/02/2017

The factory was provided with a freight only rail link consisting of a spur off the Kelso branch to the east, while a quarter of a mile to the west a passenger ^Halt^ for the use of factory workers was opened on the Waverley route.

Approximately 1,300 people were employed at the site at the peak of production.

Charlesfield Halt: Close up view of the remains of the wooden gate at the foot of the steep pathway leading to the up platform at Charlesfield; still visible through the undergrowth on the east side of the bridge in February 2017. John Furnevel 14/02/2017

At the end of WWII bomb production ceased and Charlesfield became a Royal Navy armaments depot, remaining in military use until 1963.

During the 1970s, following several years of of use by agricultural organisations, the site was gradually transformed into what is now a busy industrial estate, with ready access to the A68 trunk road less than half a mile to the east.

The siding off the Kelso branch into the site was disconnected shortly after the end of the war, while the last recorded use of Charlesfield Halt was in late 1959, with official closure taking place in 1961.

Charlesfield Halt: Standing on the trackbed above the bridge at the north end of Charlesfield Halt in February 2017, looking east along the unclassified road leading to the former munitions depot, visible in the background. John Furnevel 14/02/2017

Charlesfield Halt: A BR Sulzer Type 2 with an up train on the Waverley route in the mid 1960s, seen here shortly after leaving St Boswells. On the embankment just above the rear coaches stood the wooden platforms of Charlesfield Halt, opened in 1942 to serve a Government munitions factory located off picture to the right. See image [[58342]] Dougie Squance (Courtesy Bruce McCartney) // 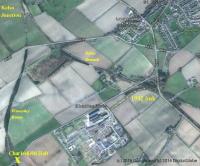