Based on an article first published in Railway Digest Scotland in April 1990.

Aberdeen: Suitably attired and equipped team of demolition specialists involved with the removal of the platform canopies at the north end of Aberdeen station in February 1973. John McIntyre /02/1973

It is many years since the network of Great North of Scotland lines was closed, with today only the main line from Aberdeen to Keith remaining open to passenger traffic. While much has been written about the step-by-step dismemberment of the Great North, particularly during the 50s and 60s, this article concentrates on the former hub of the network, the north end of Aberdeen station, in particular events which took place there during 1973. 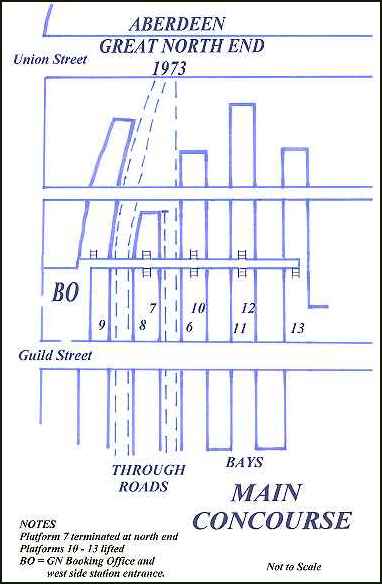 The starting point for most trains on the Great North was the Joint station in Aberdeen, opened in 1867 on what became known as the Denburn Valley line. Prior to this Great North services had terminated at Waterloo with those from the south running into Guild Street.

The opening of the spacious new 1867 Joint station, with its massive overall roof and improved facilities, had resulted in considerable benefits in terms of both passenger interchange and through working.
By the early 1900s, as a result of the continued growth in traffic, it was decided to carry out major extension and rebuilding work on the Joint station. This work resulted in what became essentially a new station and, although it was opened for traffic in 1914, the outbreak of World War 1 resulted in a delay in the final completion of the work by a further 6 years.
I arrived in Aberdeen at the start of a three-year stay in the city in late 72; long after the last trains had left for Alford, Banff, Elgin (via Buckie or Dufftown), Fraserburgh, Macduff, Peterhead and so on from the Joint station.
By that time the north end had seen better days. The tracks had been removed from platforms 10-13 although others were still in place. Platform 6 (north) was used by the Aberdeen - Inverness trains (at that time Swindon Cross-Country DMUs). On platform 7 (north) the line had been truncated and was accessible only from the south end. Platforms 8 and 9 were, like 6, still through roads, although their use was by this time down to the occasional passing freight or, whenever the need arose, the switching of a passenger service from the normal platform 6.
With so much of the north side out of use it was inevitable that such a prime city centre site would eventually be sold off by British Railways for redevelopment, indeed, as time went by it became more and more desirable that something be done to address what was rapidly becoming an eyesore.

Aberdeen: Aberdeen August 1973. Looking south over the remains of the north bays towards Guild Street Bridge as the first site hut appears and construction preparations get underway. John McIntyre /08/1973

BR eventually completed disposal of the site with redevelopment work getting underway in early 1973. This initially involved demolition of the canopies on the platforms north of Guild Street Road Bridge together with the covered footbridge, which spanned this part of the station.

The work was completed in a matter of weeks with the site north of Guild Street Bridge being clear of canopies, footbridge and associated ironwork by the end of March. Then, after a gap of just over three months, new construction work began in July 1973.

The old North signal box at the station hung on for a few more years but was subsequently demolished in the 1980s when, following completion of a major resignalling project, all activity was taken over by the Aberdeen Signalling Centre.

Aberdeen: Looking back towards the station over the north end platforms in 1973 with the walkway and canopies gone and new construction work about to start. John McIntyre /08/1973

Further track rationalisation also took place alongside the resignalling work with the truncated line from the south into platform 7 being reinstated as a through line alongside platform 6. At the same time platforms 8 and 9 were fenced off from the main station with the tracks being lifted and replaced with a headshunt along the centre of the formation providing access to a carriage washer and other facilities at the south end of the station. A further headshunt was installed to the north to facilitate access to platforms 6 and 7.

Today new buildings cover the area at the Great North End formerly occupied by platforms 10-13 as well as spanning the current platforms 6 and 7. The remaining area between Guild Street Bridge and the main station concourse is now used for car parking although the southern ends of the filled in bays are obvious and the remains of the original canopies still stand.

The various photographs posted to the website, which include several taken during the 1973 demolition work will, hopefully, provide a poignant reminder of Aberdeen?s once Great North End.